It’s been quite a ride for Canadian rockers Jonas & The Massive Attraction since the release of their album Big Slice in 2010. The album hit Top 15 in sales nationally in Canada on the Nielsen SoundScan Sales Charts in its first week of release. With three chart topping rock radio singles, including their Top 10 hit “Big Slice,” Top 15 single “The Deep End” and Top 20 song “Seize The Day,” the band was named one of the Top 10 “Most Played Artists” at Canadian rock radio on the Mediabase year-end radio charts for 2011. No small feat, considering they did it on their own indie label, Big Slice Records. 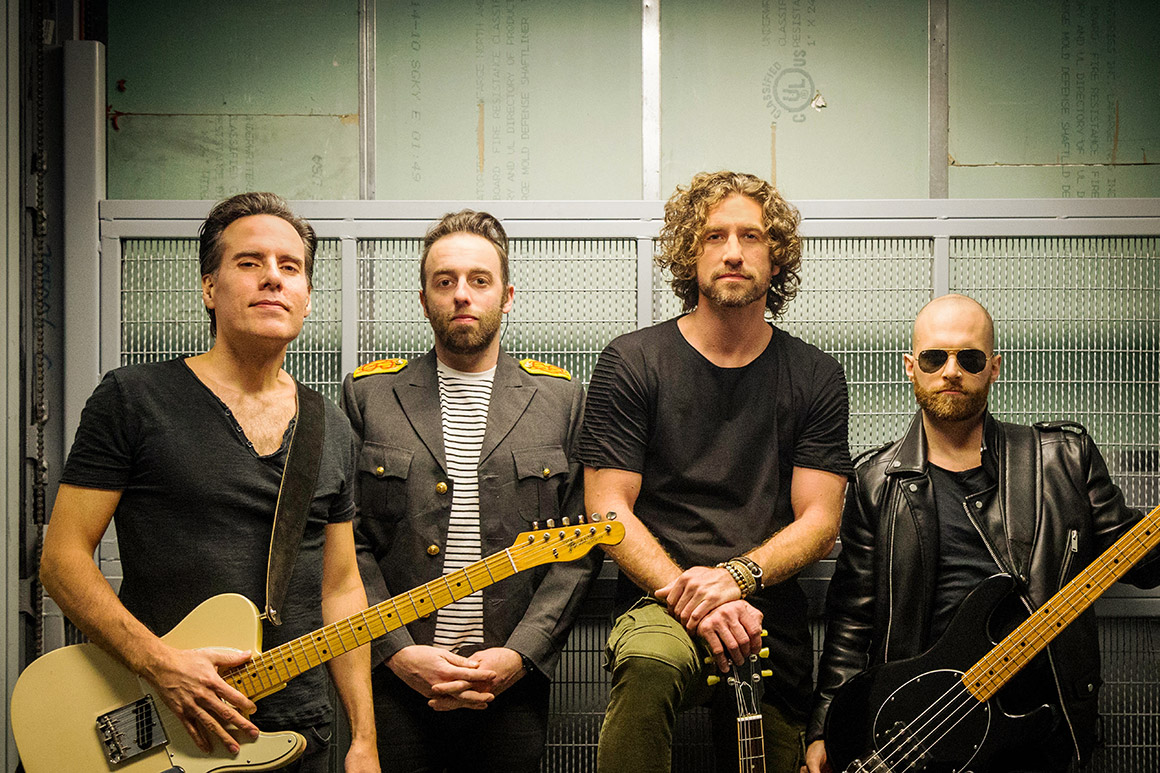 Jonas & The Massive Attraction, featuring lead singer Jonas Tomalty, long time guitarist Corey Diabo, J.S. Baciu (Bass) and Francis Fugere on drums, created quite a buzz at home and beyond when Big Slice, their debut release internationally, hit the shelves in February 2012 throughout Europe. The band spent three months of the year touring extensively in Europe, performing with the likes of Lenny Kravitz, The Cult, Roxette, Uriah Heep and played the main stage at Bospop, one of the biggest rock festivals in The Netherlands, as well as Harley Days Festival in Hamburg, Germany.

Their highly anticipated new album, Live Out Loud, was released in Canada on May 14, 2013 and in Europe on May 17, 2013 on Big Slice Records. The first single “Ultimate Low” has already cracked the Top 50 on release and is currently climbing the Canadian Mediabase Active Rock Charts at # 30, alongside Soundgarden, Billy Talent, Three Days Grace and Imagine Dragons. Jonas & The Massive Attraction’s first ever original French single from the new album, “Respire”, entered the BDS Top 100 charts in Quebec at # 28 and shot up to # 3 in the third week as the # 1 most requested song.

Jonas & The Massive Attraction’s new Cd Live Out Loud is the fourth album for Juno-nominated singer Jonas Tomalty. Since his band’s 2004 tour with Van Halen and the release of their debut album Jonas, featuring the hit single “Edge Of Seventeen”, the singer’s popularity has skyrocketed. The near platinum-selling album was nominated as “Rock Album Of The Year” at the Juno Awards alongside Hedley, Our Lady Peace, Theory Of A Deadman and the eventual winners Nickelback. That same year, Jonas was also nominated as “New Artist Of The Year”.

In 2006 Jonas released his sophomore album Suite Life with producer John Webster (The Cult/The Scorpions) at the helm. The album went Gold in Canada and spawned the hit singles “Here She Comes” and “Bows & Arrows.” In 2007 Jonas headlined his own concert at the Bell Centre in Montreal to over 7000 fans and the renowned performance was released through Universal as a world class DVD entitled, Live At The Bell Centre, in 2009.

In the spring of 2012, Jonas decided it was time to start working on a new album and took off to L.A. for a few weeks to begin the writing process. While in town, he connected with fellow Canadians, Raine Maida of Our Lady Peace, Simon Wilcox, Justin Gray as well as Julien Jorgensen and Matty McCloskey from the band Rev Theory. The chemistry between Jonas, Julien and Matty was instant and the team collaborated on five songs on the new album, including “Riot,” “Bonnie & Clyde,”Breathing,” “Cover Me” and “Hope You’re Happy.” While on the road, Jonas continued to write with the band and took advantage of any downtime for writing sessions in Hamburg, Amsterdam and all points in between.

Based on success of Big Slice, Jonas & The Massive Attraction wanted to continue to push their creativity and let their music evolve and contacted producer, Marti Frederiksen, who co-wrote Aerosmith’s smash hit “Jaded” and produced their album Just Push Play. Frederiksen is not only a top notch producer but an renowned songwriter, who has written hits for such stars as Pink, Buckcherry, Carrie Underwood, Gavin Rossdale (Bush) and Mick Jagger to name a few. Frederiksen invited Jonas down to Nashville for a few days of writing and they totally hit it off and wrote “Good Life” together with Mark Holman for the new album. The two kept in touch throughout their collectively busy schedules and reconnected in October at Frederiksen’s home in Hawaii for a 10 day songwriting session. “Writing with Marti in Maui was a truly Zen experience” says Jonas, “it really gave us the chance to hang out together and work out the new material. We got into a great routine. We’d write in the mornings and take a break in the afternoon to go ride the Harley’s, go surfing and scuba diving, then we’d come back for dinner and demo the songs we’d written that day. To have a chance to connect and write with someone like Marti was amazing and to do it somewhere like Hawaii was even more inspiring.”

Live Out Loud is produced by Mark Holman and Marti Frederiksen and was recorded at Planet Studios in Montreal and Westwood Studios in Nashville. The new album is a continued step forward in the evolution of the band’s sound. Big rock songs like “Ultimate Low,” “Fire It Up, ” and “Riot” are signature Corey Diabo guitar riff follow ups to the single success of “Big Slice,” while “Breathing,” “Only Human” and “Too Young To Be Broken” demonstrate a newfound, contemporary sound. Like its predecessor, Live Out Loud combines all things Jonas & The Massive Attraction to deliver a message of hope and positivity, with a sound they can really call their own.

As their growing legion of fans will tell you, seeing Jonas & The Massive Attraction LIVE is fully understanding what the band is all about. Having toured with Van Halen, Collective Soul, Deep Purple and Kid Rock, it’s easy to see how this charismatic young band have learned how to put on a powerful, entertaining performance that is second to none. Watch out for Jonas & The Massive Attraction as the LIVE OUT LOUD TOUR hits a city near you!